Vinyl sales statistics change humanity’s perception of progress. Analog records seem to be outdated but, in fact, they are impressively popular. Vinyl production is growing exponentially all over the world. The same applies to the production of specialized equipment. Professional DJs strive to buy the best portable turntable and create an amazing atmosphere in clubs.

Why do people like vinyl in the era of digitalization?

This phenomenon has a lot of social and psychological explanations. But let’s focus on the main thing – the high quality of analog sound.
The word “analog” should be perceived straightforwardly: the sound on a record is similar to the one that musicians have generated by playing on their instruments.
A natural sound wave is converted into an electrical impulse that creates an imprint on a record. An analog electric impulse can be extracted by using a pickup head and converted back into a sound wave. In the course of all these metamorphoses, the signal itself does not change its nature and works as a continuous wave. Only its physical reflection changes. This is the cornerstone of analog sound recording.

What is the fundamental difference between digital and analog signals?

First of all, it is worth paying attention to discreteness. Digital signal can be compared with the motion picture. One second recorded on video contains 24 frames (discrete static images), but our eye perceives movement on the screen as a continuous process.
Digital audio is exactly the same thing. A continuous music stream is divided into the key points placed on a time scale. Information about them is recorded in a file. A playback device obtains this information and completes the sound wave so that we perceive it as a continuous sound stream.
The sampling frequency of most modern audio files is 44.1 kHz. That is, there are 44,100 “key points” with data about sound in one second of a track.
Theoretically, there should be no problems with the perception of such a finely segmented material. Nevertheless, most experts agree that the discreteness of the digital signal makes it inferior to music on vinyl quality. It is more challenging to deceive our hearing than sight. Intuitively, we feel the “unnaturalness” of the signal, even though we cannot perceive any problems consciously.
In fact, nobody is annoyed by the sound of MP3 files. Everything is okay with them, except that the structure of such audio is artificial. There are no mechanisms in nature and our body capable of working with such information. Surprisingly, but we somehow understand this.

Why does this happen?

Physiologists and engineers have so far failed to answer to this question unequivocally. It is believed that natural sound carries additional information that is simply not reflected by the digitized audio signal. Recording non-analog music is similar to painting a rainbow with two colors. We would get a two-color rainbow because there is no opportunity to show other colors.
MP3 and CD lack something important that is perceived by our brain subconsciously. That is why it is more pleasant for us to listen to soft, lively, and natural vinyl.
The second theory claims that, on the contrary, there is too much data in digitized sound. Our brain prefers to have fewer details and complete the picture on its own. Each person shapes this picture in a way that is more convenient for them. Hence the effect of easier perception of vinyl sound.
In this case, we recognize that vinyl is actually worse than digital audio, but this is the advantage. Space is left for imagination, and the human brain likes this. 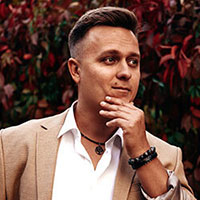 Alex Smith is the senior home entertainment editor at theGuruchoice and focused on reviews. His specialities are: technology, home theatre systems, music reviews.

If you click a link on this page and make a purchase, we may receive a small commission at no extra cost to you.